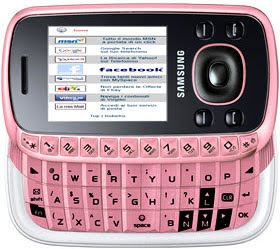 Samsung did not want to lose to come into stylish phone for teenagers. This time the phone with Samsung presents the B3310 type judging from the design, Samsung B3310 is designed for teenagers or young-minded consumers.

Samsung B3310 has a design that somewhat resembles the Nokia 6760 Surge. This phone is the slider design adopted by Qwerty keyboard. Which is a bit odd is the location of the number keys, which is placed in rows on the left side of the phone.

But when we opened his slider qwerty, then we will feel that the location of this number keys, the keyboard reflect the numbers we used to use everyday.

Samsung B3310 features of 2.1-inch screen with a resolution of 176x220 pixels. It is not too large. It also instilled sized 2-megapixel camera that can record video. Other features fairly standard, such as FM radio, Bluetooth, GSM / GPRS and so on.

For the memory business, has invested an internal memory of 40Mb, and if we still lack a place, has provided a microSD slot for memory.

What is unique to Samsung B3310 mobile phone is, access to facebook, Flickr, and Myspace and other social networking can be done easily, because it only needs to press the button only once.

Until now, the new Samsung B3310 is devoted to the European market, do not know if samsung will sell this type to the asia region as well or not.