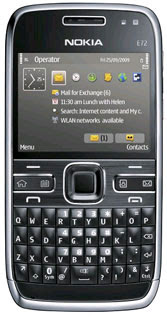 Courage as the Nokia E71 smart phone Nokia are soon replaced by the Nokia E72. This mobile phone is estimated to be present in the country at the end of the year. "Nokia E72 will soon go to Indonesia in the fourth quarter this year 2009," said Product Marketing Manager Nokia Indonesia Trisnawan Tjipto, when talking after the event Nokia 'Connection My World', in the Restaurant Segarra, Ancol, Jakarta, Selasa (11 / 8 / 2009) night.

"As a successor, the Nokia E72 has a segment that is the same as the E71 which is for the business segment. The Messaging Email the application," added Tris, Trisnawan call.

Nokia E72 introduced themselves to the event titled Nokia Connection held in Singapore, coinciding with the CommuniAsia. At that time, other than the Nokia E72 also released two other series, namely 3710 and 5530 ExpresMusic.

With the concept of candy bars, E72 remain on full qwerty keyboard, plus a navigation key Optical Navi Key, which makes it easier to do in the event in each menu. The change is visible from the camera is increased to 5 megapixel, including standard audio jack 3.5 mm.

Meanwhile, for editing and writing documents, the Nokia E72 is still using Windows Office 2007 applications. However, Nokia gives free upgarde when the application will have the latest Windows Office.

Furthermore, Trisnawan Nokia also said that Indonesia will continue to issue a series of own mobile phone. He predicts up to the end of this year, will have at least five series that will be launched vendor of origin is Finland.