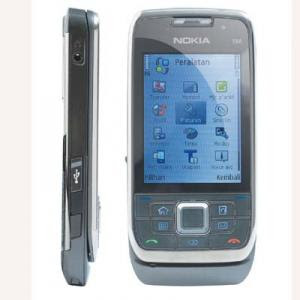 Nokia released the latest E series. E66 Series name. Features full mobile phone and this is equivalent to the preceding series E71. Even Nolia E66 series have two additional unique features, but that is important enough be regarded Accelerometer and turn to silent / silent to tap. The first related to the screen that automatically changes a landscape when the phone is playing. While the second is the ringing phone will die if there is an incoming call phone us back ago or do we beat 2 times. This work at the time we are meeting and other.

As a follow-series E65, Nokia E66 is appearing more interesting. Design of the Nokia E66 that looks expensive and according to style and not lose the ability as a Smart Phone. Nearly all the features to have in office. Suppose only internet connection and a letter. For internet connection, E66 has provided facilities and Wi-Fi email settings wizard. Usually we have to manually enter the parameters and other POP3, is now automatically have the settings. Enter your email address and password, then email can be directly legible.
DESIGN
Sliding concept adopted by the phone. Nokia E66 reaches Weight 121 grams. Know, this is due to the steel material in the mobile phone body. Cover the back of the material provided with rust-resistant stainless material is quite light. On the inside there is a small sized foam 1 cm that functions as a barrier to the casing in the body.

Keypad
Before replace the front cover, there are 9 buttons that function to operate the phone quickly. Four main key is in the middle part of the menu button, contacts, messages, and calendar. Well, when we slide the cover appear in the keypad by default.

PORT
There are three ports that are provided. On the left side there are two ports for each headset and micro USB. Meanwhile, as usual, for the charging port on the bottom of the model using a small slot.

SCREEN
Using the screen up to 16 million color TFT with the technology, it looks sharp and clear. Moreover, when used to see moving images such as video. Resolution of 320x240 pixels with a size of 2.4 inch screen, big enough for a slide phone.

AUDIO
E66 Series has a fairly large speakers on the left back of the phone. Play music with the speakers sound quite good and very fast out of the maximum volume. Moreover, listening to music with them to bluetooth stereo headset, a voice that sounded very clear and good.

CAMERA
Nokia E66 have a quality 3.2 MP camera, Smart Phone is reliable. To immortalize important moment, the quality of that is enough. Complement the features of the camera is also very complete. One of them is the image editing.