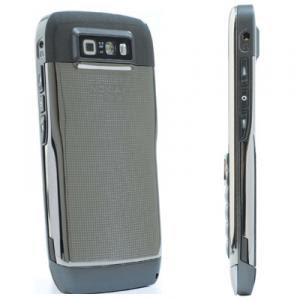 The Nokia E71. General business phone with QWERTY design appear rigid, far from the impression modis. His main concern is that more features and uses. But this is different when we see the Nokia E71. From the name, handphone Nokia E series entering this business segment, but is designed simply modis. Visible on the silver chrome feel adoption is quite dominant. Nokia E71 mentions as the "world thinnest QWERTY phone" with the phone thickness is only 10 mm.

Unlike attendance at the previous E series, many basic features in the new E71 is not found in the family series E. For example, the increase in the latest version of Quickoffice. In addition, the multimedia features which have only adopted in the N series, now we can get the Nokia E71. Not the exception of the features A-GPS and the ability to connect HSDPA (high speed packet access downlik). Other E71 features the following:

Keypad
E71 is a next generation Nokia E61i, which adopted the concept QWERTY keypad. In general, the function keypad similar to the E61i, the board only expanse of smaller keypad. But design of four one touch key to the look used on the Nokia E51. Excess is the key one touch one button can be set to two different functions of the menu, 'short press' and' long press'.

SCREEN
Type of display using the concept of landscape, measuring 2.36 inch or 48x37 mm with a resolution of 320x240 pixels. The screen on the home screen more dynamic and feature rich icon. For example at the bottom of the home screen can now be placed icons info notification SMS / MMS, email and so forth.

OFFICE
Quickoffice is a strategic application for the Nokia E series, E71 Quickoffice adopted in the latest version 4.1.35.0, which includes the ability auto find and replace word, plus more advanced formatting for ease of writing set in the display. Many tools to edit the script it Word, Excel and Power Point. In addition there are active notes, useful to create a message that notes can be combined with multimedia content and wireless presenter English dictionary.