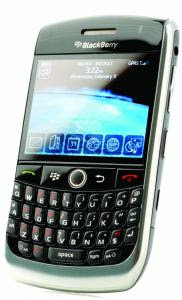 Rim launches BlackBerry Javelin Curve 8900 some time ago in Indonesia. Series referred to as a Jevelin this show with a mix of design and Bold 9000 Curve 8310. But in terms of features, especially the Internet, leaving far Bold Curve 8900. If access to HSDPA Bold, Curve 8900 only on a EDGE connection.

Although the internet connection on the side of the Bold, but provide Rim Blackberry Javelin Curve 8900 with a 3.2 Mpix camera plus flash, higher than the Bold use the 2 Mpix camera. In addition, users are pampered with the Curve 8900 display is clear. Curve 8900 using technology transmissive TFT display with a resolution of 480 x 360 pixels that enables the video can be presented with the color detail and a good performance. 512 Mhz processor usage for the Blackberry Curve 8900 is still under the Bold a 624 Mhz processor, but the performance is enough to make this smart phone can be unreliable.

SCREEN
Blackberry Javelin 8900 Curve screen is big enough that is 50 x 38 mm. With such a physical size, three-line menu containing iconic each line 6 fruit menu, can tertampung. To move the menu down to a convenient trackball is available used. The use of transmissive TFT-which is also used by 95% of the population-notebook in the world to bring influence on the quality of pictures showing both photos and video.

AUDIO
This is one of the excellent features in the Blackberry Javelin Curve 8900. Various audio file formats can be set in the music player such as MP3, MIDI, AMR-NB, Professional AAC / AAC + / eAAC +, WMA9, WMA9 PRO and WMA10. Wave music that came out of the speakers in favor double felt ears, with the effect of bass and treble that fit. Blackberry Javelin Curve 8900 also provides access to the bluetooth headset A2DP.

CAMERA
Stock 3.2 Mpix camera Blackberry Javelin Curve 8900 to make the user can freely explore the feature photography. A number of facilities attached to the camera features such as flash, white balance, contrast, zoom, and brightness. Just like camera phones, in general, the maximum will be obtained when we take photos outside the room with sufficient lighting. When used for photographs with the flash lamp light at night, because the effect of flash light is not evenly distributed and only come together in the middle of the object.

VIDEO
In addition to photographs, we can record video with a 3.2 Mpix camera is. Maximum resolution that can be set is 240 x 180 pixels. From the test, record results, including smooth video, nearly no delay. A special facility is in the video player Curve 8900 be regarded komplet play DivX files from a variety of 4, DivX 5 / 6, XviD, MPEG4, WMV3, to H.263. The result is not less than when we set the laptop on the latest release.

Messaging
Facilities on the strength of the BlackBerry messaging are still in the Curve 8900. Besides SMS and MMS, email facilities and with push email is also easy to use via this handphone. Applications for work already office given Document To Go for files. Doc,. Xls, and. Ppt. With this facility we can easily open, create and edit files from a mobile phone is clever. For instant messaging, from the 8900 Curve tested try new BlackBerry Messenger application is available. Instant messaging applications while others have not yet installed

INTERNET
Unimpeded access to the internet browser that support HTML plus adopted RSS. With that support, a variety of sites on the internet can be opened as well as what is shown on a laptop or computer. Unfortunately, because it does not use 3G technology, we can only be connected to a data connection service through GPRS and EDGE only.