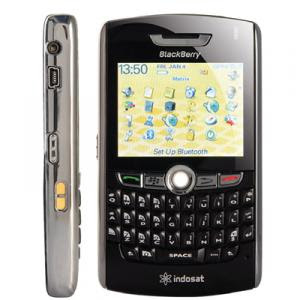 BlackBerry mobile phone such as series that have been circulating in Indonesia, the BlackBerry 8800 series is also offered in the program by bundling operator Indosat. From design, the BlackBerry 8800 is not a significant difference from the previous series. Characteristic of the console can be seen from the existence of the QWERTY keyboard.

Display
On the body there is a shortcut to the console voice dialing, above for USB data / charging, headset slot 3.5 mm and the volume button. Hole for the buzzer ringing tones and music are in the top of the console. Despite not taking the concept of hot swap, and install to remove the Micro SD card does not need to remove the battery, such as the BlackBerry 8300. To install a Micro SD and separated only by opening the back cover.

Keypad
Range is quite unique button visible. The number keys 1 to 9 to position the phone is placed on the edge, this is certainly easier for people who are active with the right hand (not lefty). Different concept with QWERTY keyboard on the Nokia E61i, which places the key in the phone in the middle position.

NAVIGATION KEY
Navigation elements to be typical BlackBerry, the 8800 series a lot of trust on the trackball. Navigation tools in the form of a ball that set the movement between the menu, in addition there are two key Softkey. At the time browsing the internet, trackball became the only means of navigation. Because the facility is not provided the camera, the icons appear more instruments so simple.

CHATTING
Chatting in the benefits of a BlackBerry. There are three types of chat moda, Yahoo messenger (YM), Google Talk and BlackBerry messenger. For YM menu is available can be more complete and attractive rather than the computer version of YM. Menu is available as a 'sign in automatically, ignore user, create new group, my status (with the display image), edit my nickname and my contact details. When you have a contact list that looks ragged, there is a function to edit the contact group from the list. In addition, when receiving buzz, YM identification can be prepared in form of vibration and light.

EMAIL
In a console, BlackBerry 8800 can accommodate 10 personal email accounts. But before users are required to create a new account in www.indosat.blackberry.com. The next step can be added to the personal accounts integrated in the concept of push mail, among others such as Yahoo Mail, GMail, and so forth. Some email accounts can be combined in a single inbox. Receive and reply to email as easy as can be pro-SMS, email all applications can support the attachment file.

INTERNET
BlackBerry 8800 is not provided internet access 3G. But in testing internet connection via GPRS evidently very good. The ability of the browser function menu 'go to, history, edit a bookmark, copy bookmarks and bookmark send via SMS. In addition to GPRS, BlackBerry 8800 also supports access to EDGE (Enhanced Data rate for GSM Evolution). Few be pitied, visual web page can not display the XHTML format.