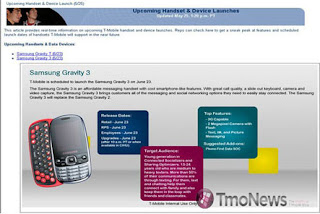 Not much different from its predecessor, the Samsung Gravity 3 also still offer the phone with a sliding sideways and comes with Qwerty keyboard. Still, only three designs offered Gravity is sweeter than its predecessor.

For features, it looks like Samsung have been deliberately does not offer advanced features such as embedded in other series. This time, Samsung is only equipped to include 2MP camera with Flash, GPS, Bluetooth, IM, MMS, and did not miss a microSD memory card slot.

According to information, the Samsung Gravity 3 slides ready for the first time into the American market on June 23 coupled later with T-Mobile for sale.

But unfortunately, although Samsung Gravity 3 slides ready, but until recently Samsung has not provided information about the planned price of the phone will devoted to subjects that young. Thus, we can not give certainty what price will on Samsung Gravity 3.

In addition, we have not found any information about availability in Indonesia. So, for you young people who want to have a cool phone nan this style, you'll need a little patience and hope. Hopefully Samsung Gravity 3 could come to Indonesia in the near future.