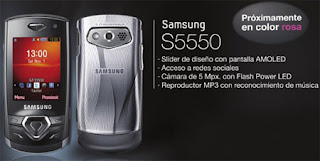 Rumors about the Samsung S5550 has now become a reality. Because samsung has thrown this product on the market. Surprisingly, the existence of this series has not been announced officially, but it was not the first time that Samsung released a phone to market without proper recognition.

Samsung S5550 specification is unclear, but they are enough to give you an idea of what can we expect from this device. Samsung S5550 is a slider phone shape, sail AMOLED and 5-megapixel camera with Power LED flash.

The back of Samsung S5550 look impressive, with a bandage metal material. As you might have guessed, this device will also come with a music player. But the most interesting part seems to support social networking services.